When I was taking metalsmithing classes, one of the forming techniques we learned for forming sheet was clamped sinking: you bolt just inside the edges of a metal sheet and hold it in a clamped plywood form with a recess in the middle that has the outline you want. I think the critical part of this lesson was that you then form the metal by hammering it down into the void in a spiral pattern, going around the outside, then working your way inwards. This way you distribute the stretch over the whole area.
A friend is trying to press-form battery springs in very thin aluminum flashing with 3d printed dies, and his dies kept punching through the aluminum. I was thinking about how deeply we could sink metals by careful stretching, so I thought I’d try it in a progressive set of printed dies.
I made five dies, printed in PLA with 70% infill. Each die has a base that is 25x25mm, 6mm thick. The female die has a conic recess with a 30 degree slope, 10mm in diameter. The male dies have a series of frustra of increasing height, terminating in a conic section. The male dies have a base diameter of 7.8mm, because the difference between that and the female die is the thickness of the metal I’m trying to dimple.

Blacksmiths use a tool called a spring fuller. It has two arms that join with a sprung pivot on one end, and in the other end, hold whatever it is you’re hammering into your work: cold chisel or fuller grooving die. Similarly, aircraft mechanics use the same general setup if they need to single-handedly put rivets in really difficult to reach places, where they need a massy anvil held in the right place behind the finished head but can’t see where they’re working, or they need to match-drill a hole to a hole beneath the top layer.
I designed my first 3d printed fuller anvil tool to peen the heads of copper rivets going through a carbon fiber structure, where I didn’t dare crush the carbon fiber, and it worked so well it seemed like the right tool for the job here.
So I printed a spring fuller 30mm wide, that the anvil dies press into, female on one side, male on the other, and then I can stick them in the vise and smoosh them closed and know they’ll start off aligned. (They do self-align as they’re tapered, but when you’re sinking the second and third you really want them correctly aligned to start or they’ll stretch the metal unevenly before aligning.)

Each frustrum is 1mm higher than the previous ones.
Start with #1. 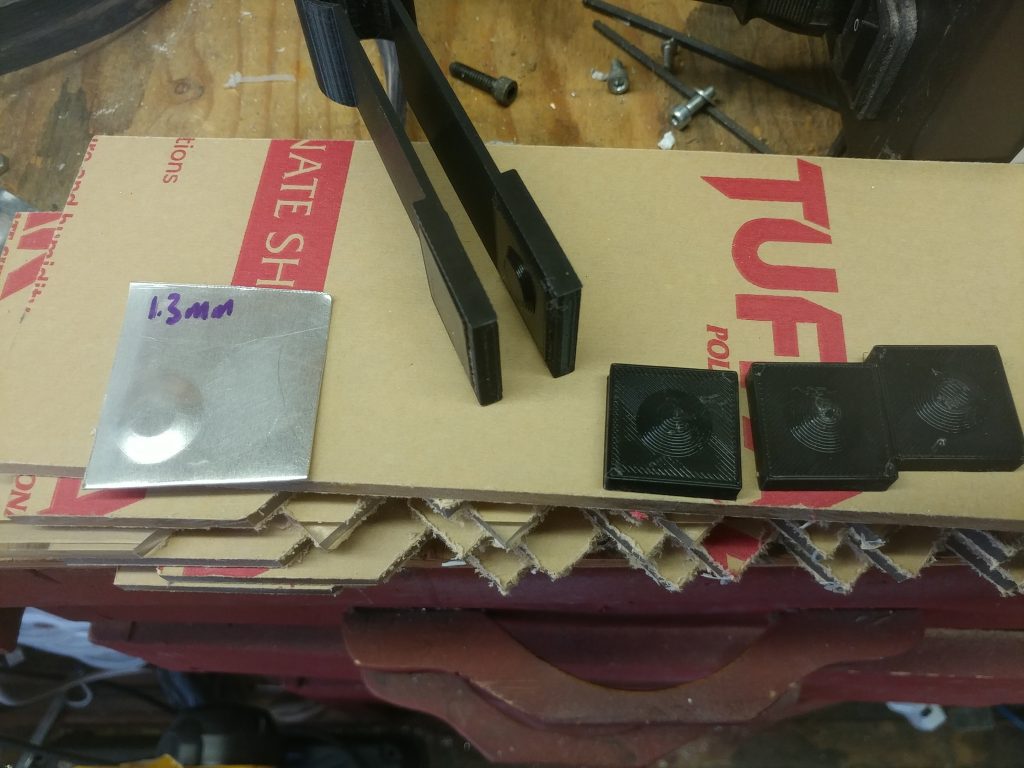 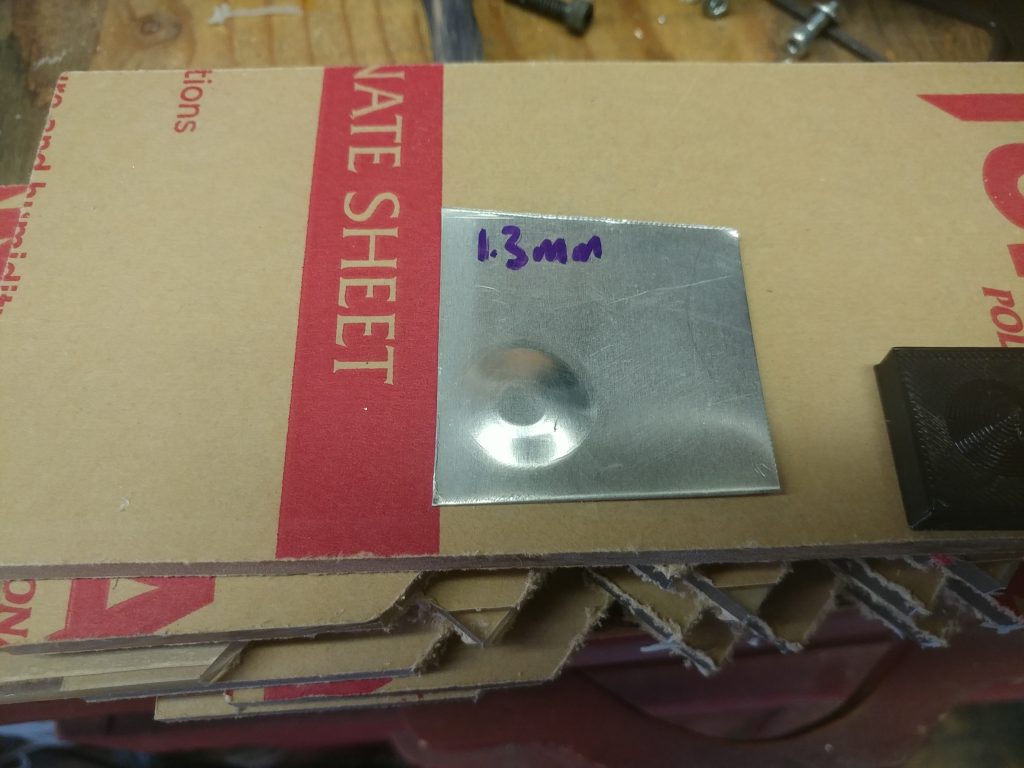 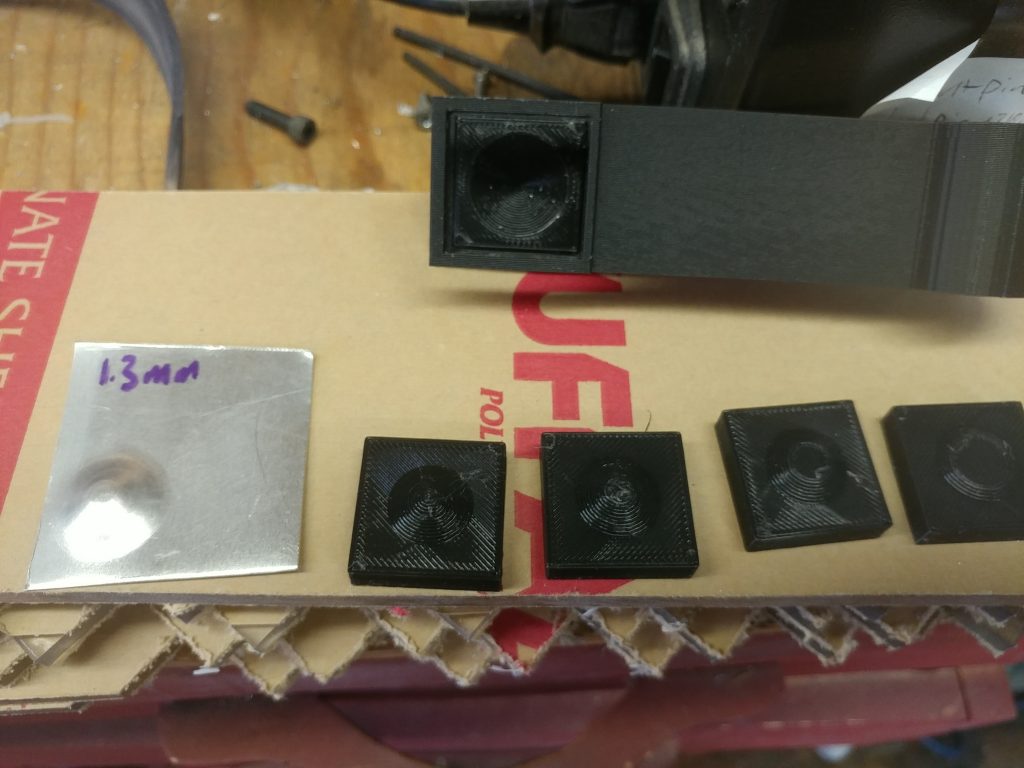 and finally the pointy #4 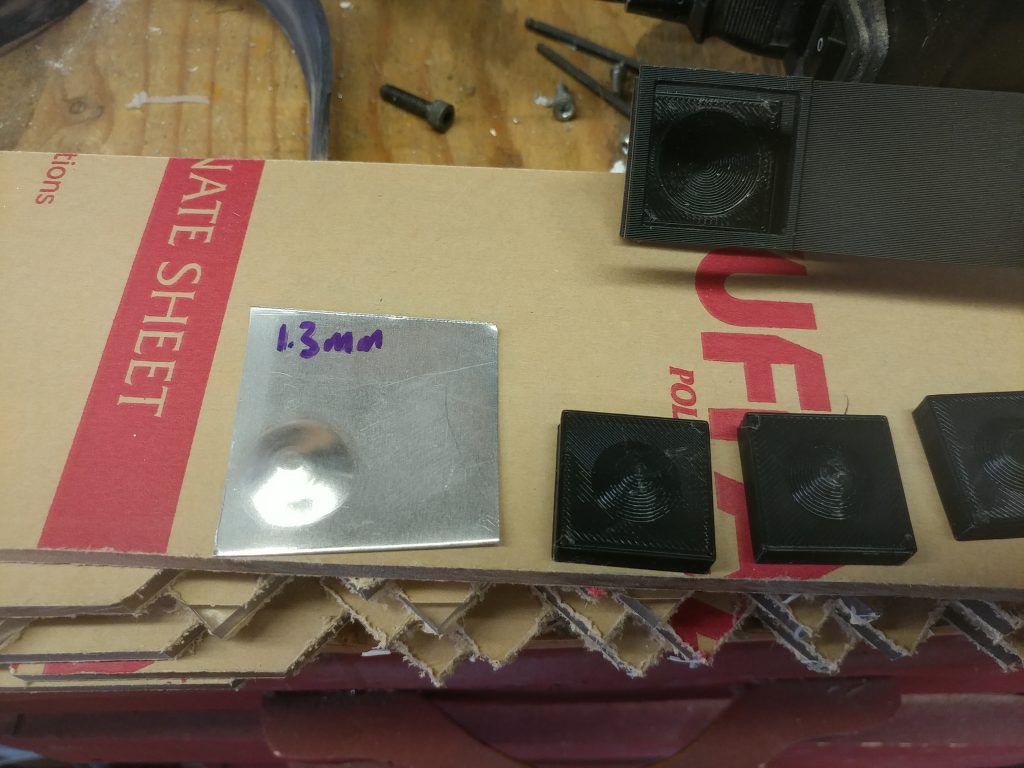 For pressing, I cut some steel pieces that sit on the vise jaws to distribute the pressure evenly across the back of the dies. 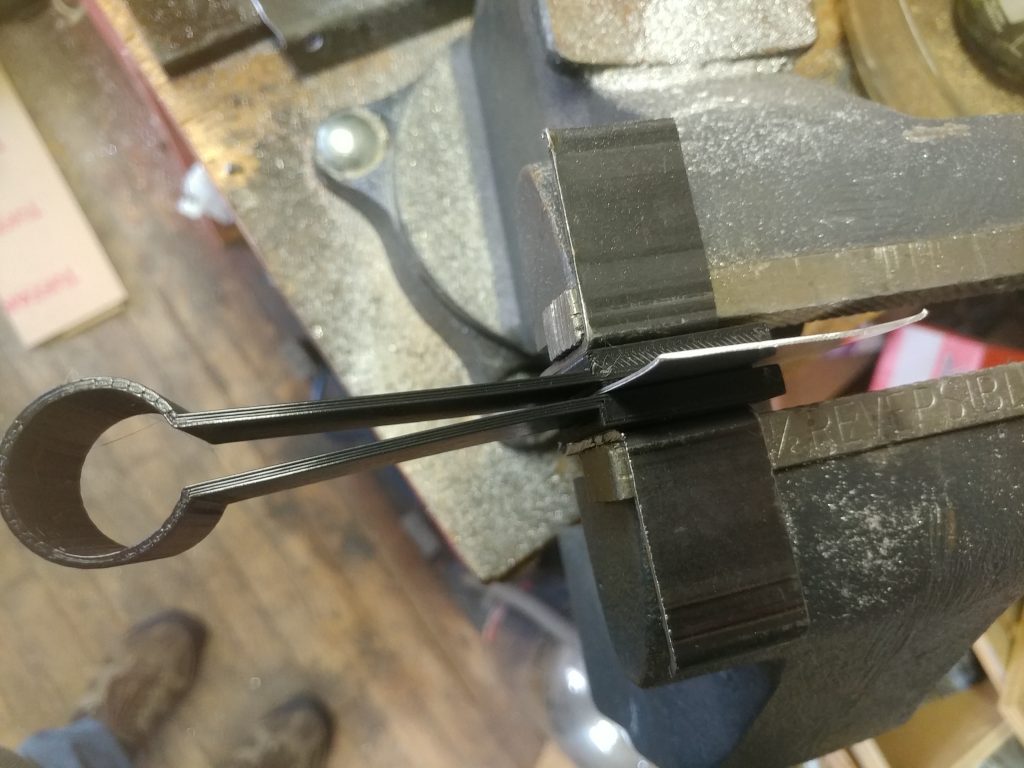 Here are a couple of pictures of all the dies and the resulting workpiece after punching. 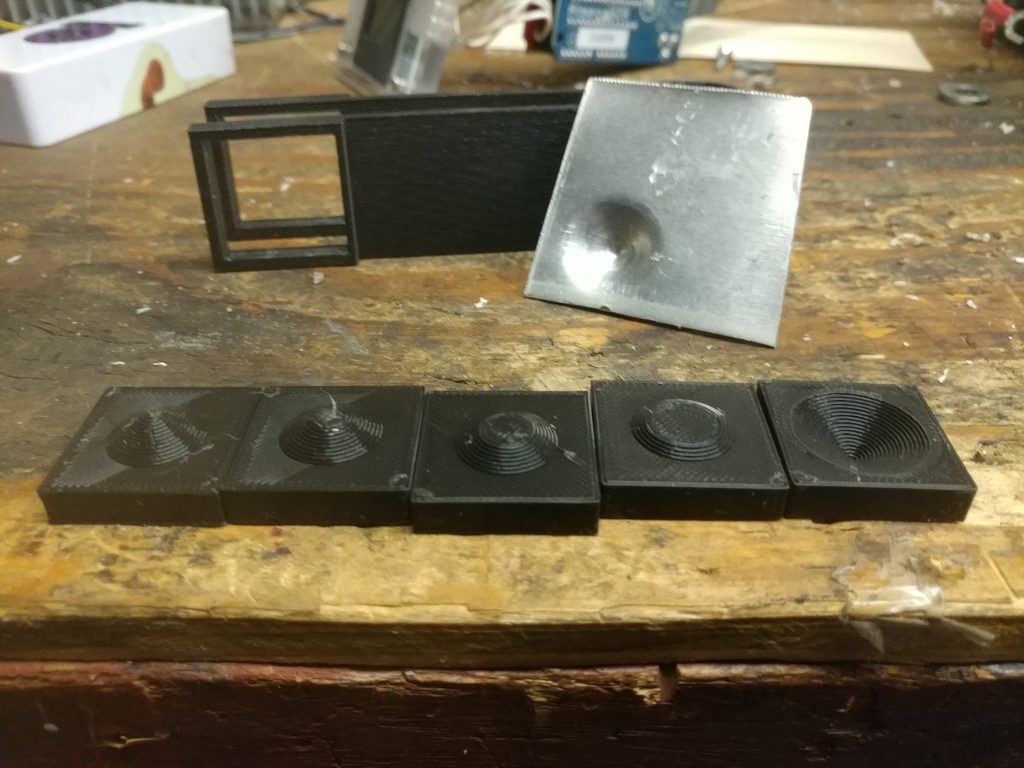 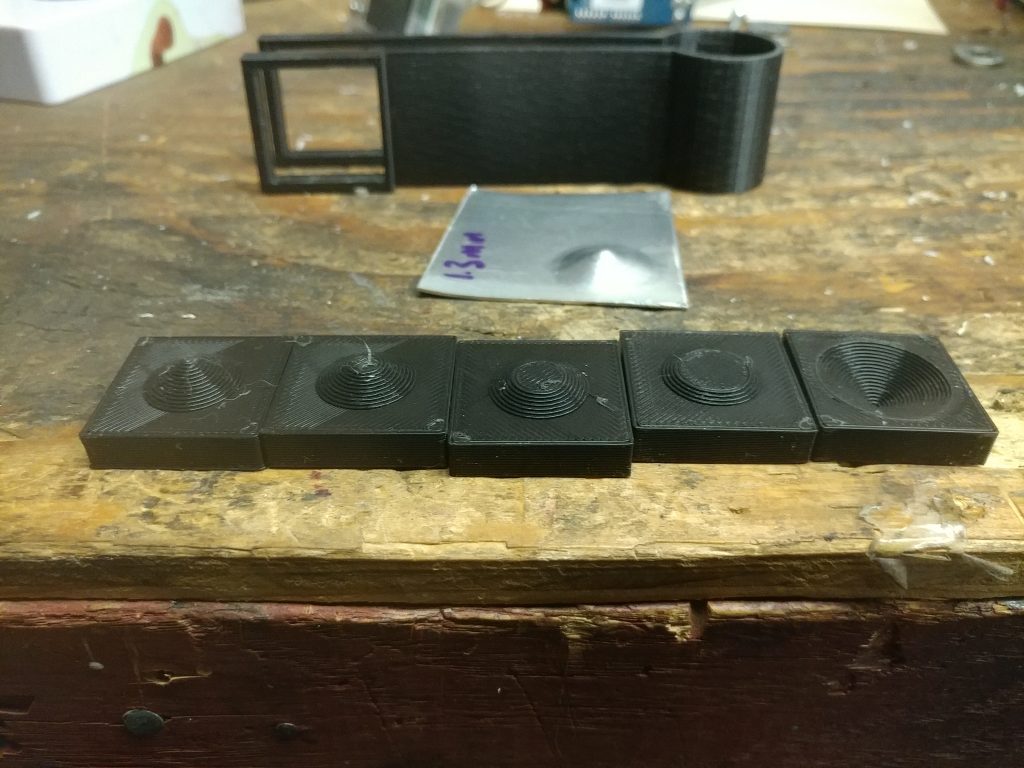 The metal is 3003 aluminum 1.3mm thick. That’s 16 gauge. 3003 is quite soft (which is why I chose it.) My intent for this is forming small replacement patch panels for old race car bodies, and 1.3mm is significantly thicker than common aluminum body panels.
I punched about 10 of these, and only the final, sharp-tipped, die showed any measurable damage. The others looked like they were right off the 3d printer plate, and measured the same dimension to within 0.05mm around their circumference.

The finished product has some lines on the sides of the cone from the previous draw cycles. Probably the best plan for making this specific shape would be to do the first three punches slightly undersize and the last punch would have a slightly larger female and male die to stretch the whole surface just a tiny bit.
But it looks to me like small batch production of stamped aluminum using 3d printed dies is entirely feasible.

Next day, adding in: 20mm hemispheres pressed in 4 steps. This did require annealing after the first two punches; otherwise, the leading edge of the punch would stretch the aluminum enough to make it fail in tension. This says to me that I need to learn more about punch design: I think right now I’m stretching the metal in five shallow bands separated by thicker sections. These dies were made with a rounded lip to distribute the stretch more evenly, and maybe that needs to have a larger radius. 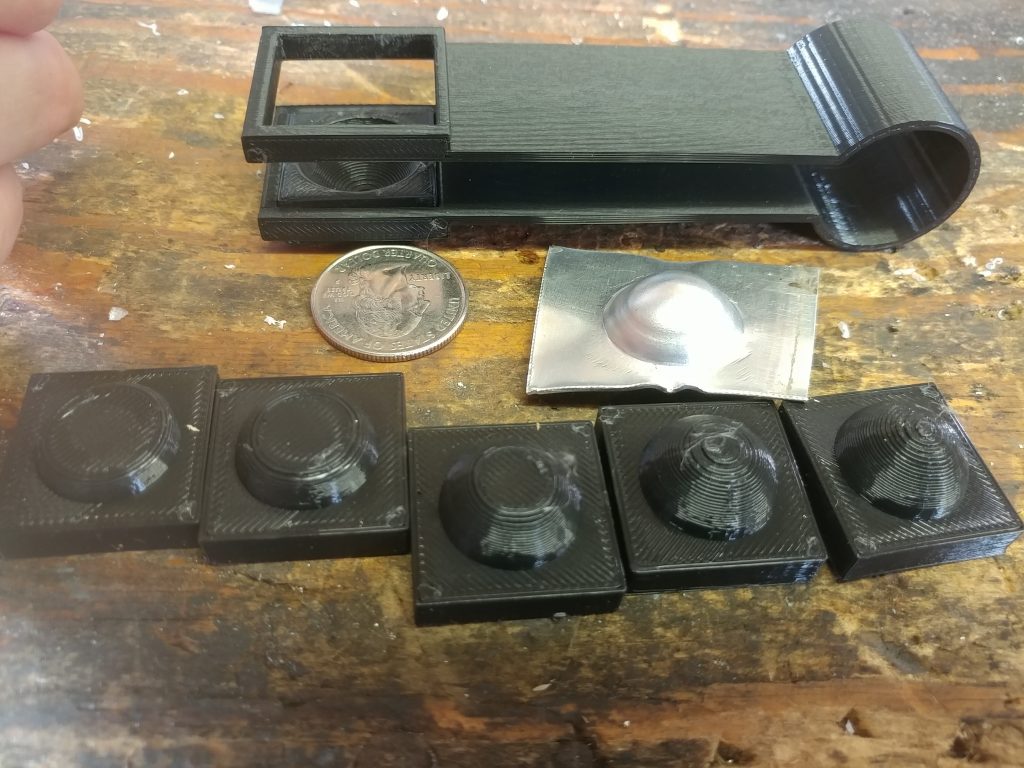 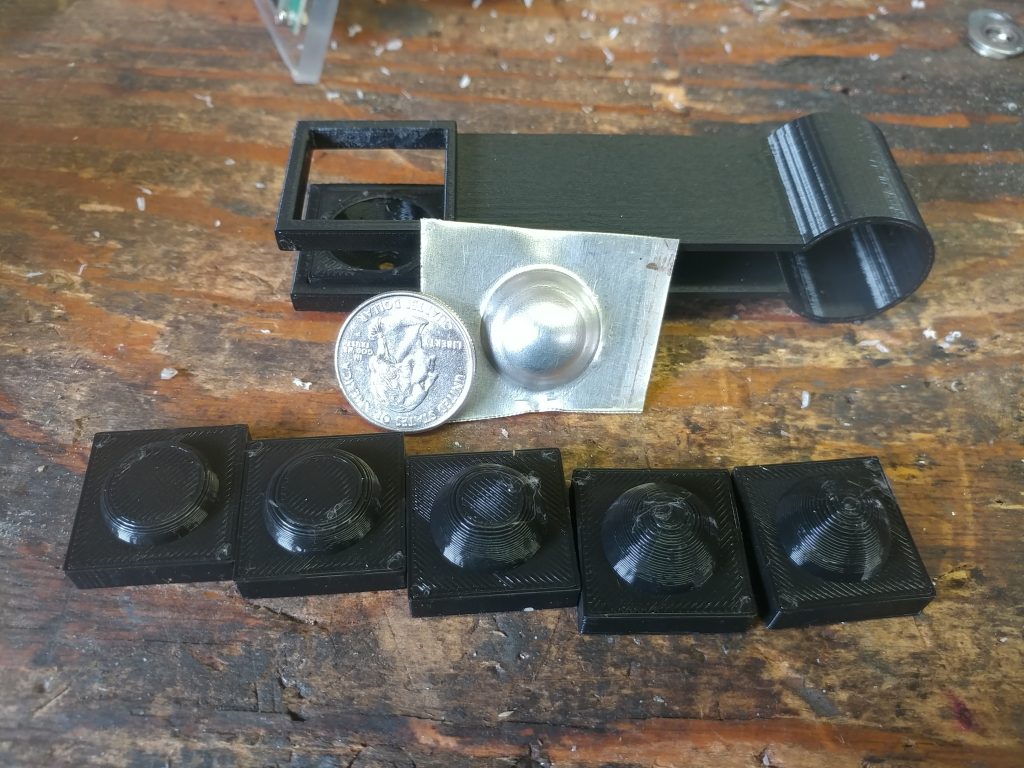 I’m ridiculously pleased with this. This is a good start on pressing a small fuel tank or a brooch from thin gold.
Next up: form a thin shell structure, then stamp between two complex dies to get re-entrant complex curvature.

Next update: I didn’t get to making the re-entrant shape yet. Instead I moved to steel.
Here are two shots of a 12mm deep stamping in un-annealed, right off the Lowe’s rack, galvanized steel sheet. 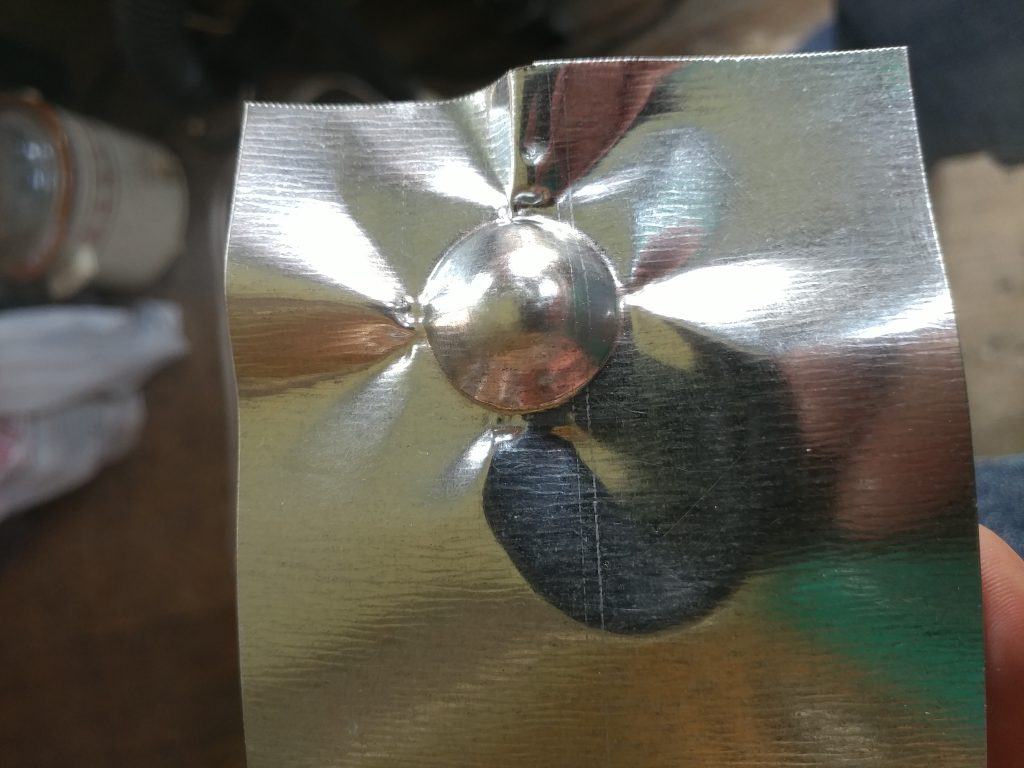 From the top you can see there are no folds or wrinkles going up into the stamped part. I think it’s interesting that the Z layers print all the way through the steel, showing up on both sides, so using PrusaSlicer’s variable layer height option is probably a good idea for the top of the final die.
Here it is, cut out. 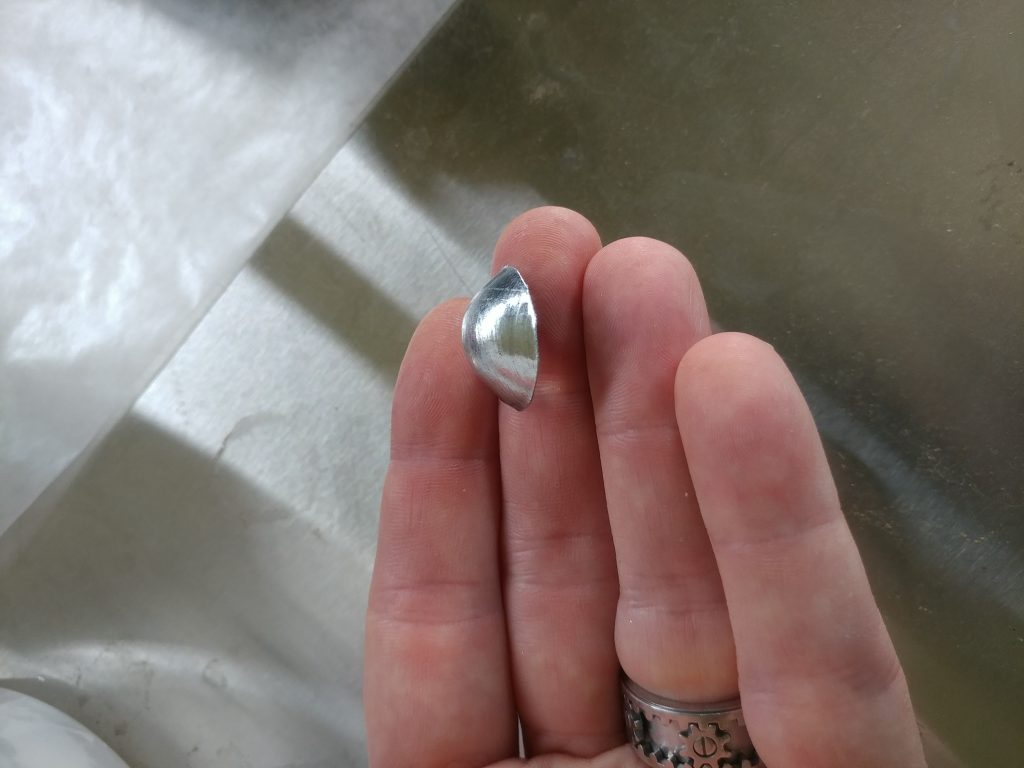 The female die for this has now gone through more than 40 stamp cycles and is still in fine shape. All the dies now have marks on their flat outer surfaces from the metal folding and concentrating stress, but the action parts of the dies are still in great shape.

What I need to do is figure out a way to clamp the outside flat first, then press the stamp die through: make the male die a two-part with an outer and inner sections. The drawback to this is it’s no longer an easy stamp in the vise setup, so I’m still thinking about this.