I am putting in a small scale solar system with a 24VDC flooded lead acid battery bank for back up power. I want to make a low power consumption expanded scale analog meter circuit to monitor the battery bank voltage of my system. The expanded scale allows me see the voltage range that I am most concerned about between 21V to 30V and that gives me about three times the resolution on the meter face. 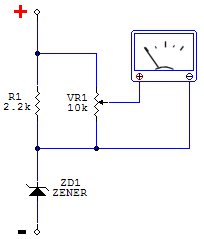 While searching for circuit ideas I found this website “The Back Shed” and I liked the simplicity of the circuit that they presented on their site (this is the circuit from their site). I tried to make the circuit but found that the response was not very linear.

The problem with this circuit is that the current going through the Zener diode changes as the voltage input to the circuit changes (I=V/R) because it uses a simple resistor current limit.

I wanted an expanded meter with a fairly linear response. So after thinking about the linearity issue with the Back Shed circuit and how it was related to the current changing in the circuit, I decided to revisit our old friend the current limit circuit I blogged about previously.

I modified the current limit to pull about 1.5mA through the circuit and added Zener diodes in place of the LEDs.

(To get a larger image, click image, then click image on the following page) So here is how this circuit works: For voltages below 21V the Zener diodes are off and there is no current flowing in the meter path of the circuit. Somewhere around 21V the Zener diodes crack over their knee voltage then current starts flowing in the circuit. The current limit circuit turns on and starts to drop voltage across the 2N7000 NMOS FET. As the voltage going into the circuit rises the current limit circuit causes the NMOS to drop any voltage not going through the Zener and current sense resistor. The Zener diodes drop a fairly constant voltage in this circuit because the current limit circuit is holding the current at a fairly constant rate. Since the 10VDC panel meter is measuring the Voltage across the NMOS it displays any voltage over ~21VDC on the meter face. The battery bank voltage should not go over 30VDC , unless there is something wrong with the charge controller, so hopefully we never see the meter at 32V.

(Note: instead of the 400 Ohm resistor in the schematic I used a 1K trim pot in series with 200 Ohms) (Also for the meter I bought a cheap 10VDC panel meter from E-bay, $5.99 including shipping)

This circuit still has the drawback of the temperature coefficient (TC) of the Zener and also the temperature effect of the VBE on the transistor that will have an over all effect on the accuracy with temperature. The temperature error is a very small (around 0.08%/degree C, for a change in room temperature of 65F to 75F you would see an error of less than 0.1V) and that small of an error really does not matter to me. If you are concerned with having a more accurate meter over a large temperature range, you can use a combination of Zener diodes with a positive and negative TC. An example would be to use four 1N5222B (TC=-0.085%/C) and a 1N5242B (TC=+0.077%/C) .

I took the 10VDC panel meter apart and scanned the face in on a flat bed scanner at 600DPI then modified the the scan with GNU Image Manipulation Program (GIMP) and reprinted it at 600 DPI onto a shipping label sticker. Placed the sticker onto the meter face cut the edges of the sticker off then put the meter back together. The following picture was the first pass:

After I put the circuit to the meter I found it was a little off ( this is was really no surprise, since Zener diodes are +/-5%, but it was a lot closer than I expected) so I had to calibrate the meter with one more graphic spin in GIMP. To calibrate the meter face with the actual DC voltage reading. I put the expanded scale meter in parallel with a digital multimeter, made little tick marks on the meter face for the voltages.

I ended up with a graphic like this.  ( Note: I highlighted the 28.8V mark since this is where my charge controller will push the battery bank to at the bulk charge phase) ( the 30VDC mark is also important for when I equalize the battery bank)

And here is picture of the meter hooked up with a power supply and a DMM to verify operation. 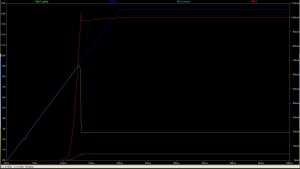 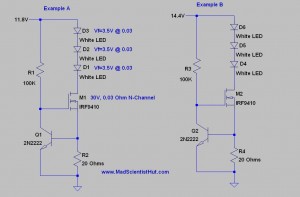 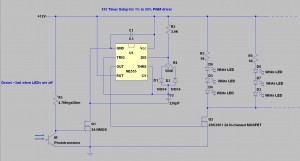 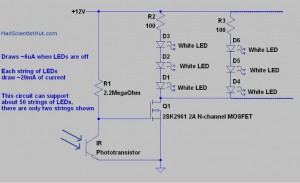 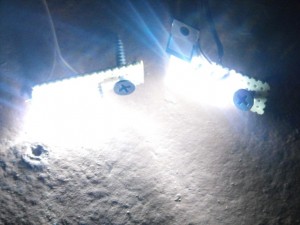 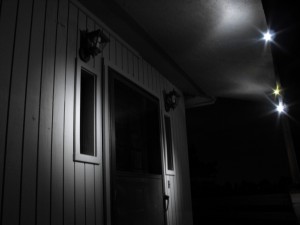